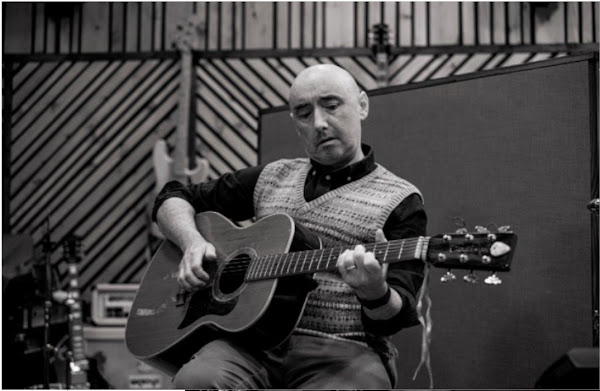 Jim McCulloch is one of the best kept secrets of UK Songwriting. He has been involved with a number of superb acts including The Soup Dragons, Snowgoose and Green Peppers. His style of songwriting is wonderfully folky. Snowgoose - The Making of You was one of my favourite albums of last year.

On 21 May this year, he will be releasing his first ever solo album - When I Mean What I Say. It will be released on the superb Violette records, which was of course the home of Michael Head. I catch up with Jim and we talk about the new record and everything music related!


Q. Hi Jim, you are soon to release your long awaited solo album. How would you describe it?

A. Hi Julie - well - it's a very personal album - extremely autobiographical. But I hope that there's enough there of the Universal experience for everyone to identify with. It's definitely an internal journey of sorts.


Q. What can we expect to hear?

A. Sonically it's very stripped down. Some of the tracks are just me performing live acoustic guitar and singing. In saying that there's also bass and drums and classical harp on a few! I like to record very quickly and capture a specific performance rather than fine tuning and polishing off any rough edges. So there's that.


Q. Its wonderful to hear you are releasing the album on Mick Head's old label - Violette. How did you become involved with the label?

A. I've known Matt at Violette for a few years. I'm a total fanboy when it comes to Mick Head and always have been, and so any label that puts out Mick Head music is one that I'm going to take an interest in. Matt and I used to exchange mixtapes back when audio cassettes were still common currency, and that sense of a shared love of good music was always at the back of my mind when I was considering who to send the finished album to. In the end they were the only company I reached out to.


Q. You have been involved with a number of artists over the years. From The Soup Dragons (who had chart success in the early 90s) to Folk band Snowgoose with Anna Sheard. Have there been any particular highlights or favourites to work with?

A. That's a difficult question as we are covering a lot of ground here!! Every bunch of musicians I've worked with hold certain special memories… playing the Splash One club in Glasgow in the Soup Dragons when we supported Primal Scream… it was our first ever gig. I still treasure that with great affection. Most recently and just before lockdown 12 months ago performing as Snowgoose, Anna Sheard and I played a live BBC Television show called The Quay Sessions. That was intense and felt very special.


Q. How did you feel about The Soup Dragons change in style/sound from indie to the more commercial indie/dance crossover?

A. At the time in 1988, the band had reached a bit of a crossroads. We had been dropped by Sire Records and our drummer Ross Sinclair had decided to leave the band and go back to Art School to finish his degree. So we were drummer-less and needed to get on with things. So we demoed material using a new-fangled drum machine and Akai samplers… the technology just gradually became a part of our sound. Plus we were managed by a company called Big Life who had deep roots in Dance/DJ culture and so we had access to people like Coldcut who had mind-blowing record collections.. a real eye opener for young blokes from Glasgow. We were only 21/22 at the time.

Q. Did you get into music at a young age? What started your love of music?

A. Yeah - I started teaching myself to play guitar at around 13/14. I had been given an old battered family guitar and I saved up to buy a book of Beatles songs. I never really looked back from there. There was always music in the house. My mum was a Primary school teacher. We had a piano in the house and she was the go-to person in the area we lived to play Church organ at Weddings and Funerals. Plus of course we watched Top Of The Pops religiously every week…


Q. Is there a song you have written, or a project you are most proud of?

A. I wouldn't want to pick just one, but ok I will. I wrote this tune for Isobel Campbell when she was collaborating with Mark Lanegan called “We Die And See Beauty Reign”. It was on an album called Hawk... we used to open our live sets with it when we toured America and Europe. It's very simple but very intense!


Q. After many years of collaborations, playing in bands e.t.c. this is your first ever solo album. How come it took so long to come about?

A. Well - long story short… I went back to school! When I joined the Soup Dragons back in the day I had dropped out of College to become the buccaneering sonic adventurer I am now (!) . We kind of hit the ground running and I never looked back. But as years went by I wished I had finished my education and so 4 years ago decided to apply to Uni and ended up getting a couple of Music degrees. The album is the result of this as it was my Songwriting Masters dissertation/creative project.


Q. Was it different writing songs for yourself rather than for someone else to sing? Was there more freedom e.t.c.?

A. Yeah - it was a bit unnerving at first but the realisation eventually sinks in that all these creative decisions are yours and yours alone to make and you have no-one else to blame if things don't go as you intend!


Q. Who are you most inspired by? Do you have any favourite artists/songwriters?

A. Laura Nyro/ Carole King/Jacques Brel/A C Jobim/ Love/ Brian Wilson. The list could go on and is probably endless.
Q. Do you have any plans for new projects, gigs e.t.c. after the lockdown is over?

A. Absolutely - Anna and I want to put together some shows for Snowgoose as we didn't manage to play when our last album The Making Of You came out last year. I also want to play shows to promote this new solo album of mine whether by live stream or whatever. I'll just have to wait and see which way the wind blows.


Preorder (available soon) the new album When I Mean What I Say, here on Violette
Release date: 21 May, 2021
Opening photo taken by Brian Sweeney.