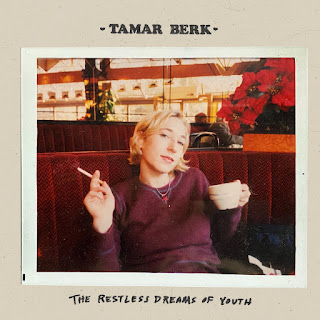 Released: 26 Feb 2021
Label: _
Listen and Buy Here
Tamar Berk, from California, makes her solo debut and it is a wonderful listen, full of guitar pop gems.
Her sound is reminiscent of the  early 90s and brought to mind artists such as Juliana Hatfield and Liz Phair.
It opens with 'Skipping the Cracks' which is brilliantly upbeat with great pop hooks. The theme is looking on the bright side of a breakup.
'Shadow Clues' is a lot darker and heavy sounding, with suspense running throughout. There aren't many lyrics so it is kind of hypnotic, and about barriers in a relationship. 'A New Case' is a beautiful, piano driven ballad with some heartbreaking lyrics - "There's nothing I hate more than you seeing me this way. I'm nothing more than a lump of clay."
My favourite here is 'Better Off Meditating' which is more energetic guitar pop. It has a slight punk edge to it and a chorus you will be singing along to.
Other highlights include 'Heavy & Abusive' - a sad song about fear of saying the 'wrong thing' to a short tempered partner. 'Til I've Won', is a heartfelt love song with some beautiful melodies and superb vocals. 'In The Wild' is more hook filled, Summery pop. It ends on 'Suitcase & Gun', a slow song about trying to escape from somewhere, with vivid lyrics.
A fantastic debut and a hugely enjoyable listen. Highly recommended.