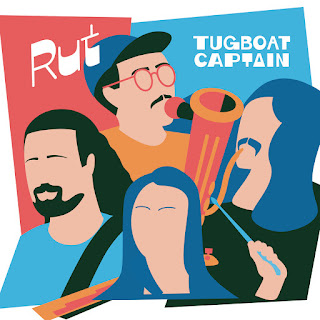 Tugboat Captain, from London, are a fairly new band and this is their debut studio album, although they have had more lo-fi DIY releases before. It is full of memorable and melodic indie pop anthems.
It opens with 'Check Ur Health' which is epic and even has an anthemic singalong towards the end.
'If Tomorrow's Like Today' is the standout here and quite upbeat with melancholic wistful lyrics. It is wonderfully produced and mainly piano driven which is unusual for this sort of music. There are fuzzy guitar solos, trumpets and superb vocal harmonies too. It has a lot of charm and never seems too overcomplicated.
'No Plans (For this Year)' is another highlight and very reminiscent of later Beatles, such as Hey Jude. Again, the production is rather epic.
Other highlights include 'Come Dig Me Out' which is quirky, both lyrically and melodically. It raises issues such as unemployment and behind the upbeat melodies, it is serious and sad.
'Rut...Waking Hour' starts off as a melodic ballad reminiscent of Elliott Smith. There are lots of changes throughout the song, like with 70s prog. The electronic parts brought to mind ELO. The album ends on 'Day to Day' an anthem about living in poverty with some pretty hard-hitting lyrics.
A superb album, which is unique both in sound, and lyrically. Highly recommended.