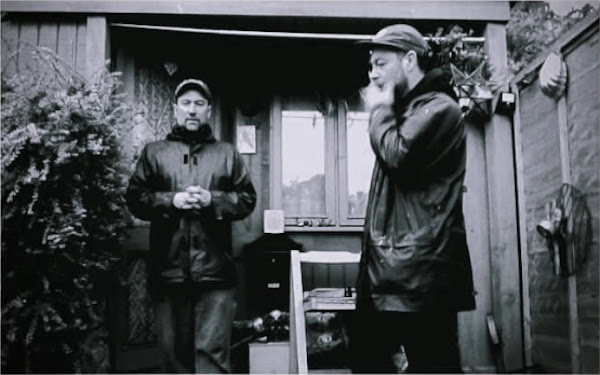 RW Hedges is one of the best, relatively unheard, songwriters in the UK today. Together with songwriting partner Luca Nieri (right in photo), they create wonderful pop songs, with lovely melodies and hooks. Their sound recalls the 60s of The Beatles, Kinks and The Left Banke, also with hints of Americana and 50s Doo-wop.

On 3 Sept this year, he will be releasing his fourth album - Year after Year. It will be released on the superb Wonderfulsound label. I catch up with RW Hedges and we talk about the new record and everything music related!


Q. You will soon be releasing 'Year after Year' the new album and follow up to 2019's Western themed 'The Hills are Old Songs'. What can we expect to hear? Does it have a theme like the last record?

A. Hi Julie, what to expect? I always hope to deliver a memorable song so I hope they can expect that. And I thought the same for The Hills are Old Songs but that was themed more like for a play? Here, if there is a theme, it could be song itself.


Q. What were the main inspirations for the songs? Were there any Artists, Films or Literature which inspired the writing?

A. Last year Luca and I felt the project we had was in the wrong time so we shelved that again and Luca suggested a set of songs more in the key of music we used to play/listen to from the early to mid 60s very much Kinks, Zombies and Beatles but also Bert Jansch or folk blues. There are even hidden American songbook elements in the odd line or structure. There is what we call a song triad and that happens with the first 3 tracks. It has a Noir story, a west coast journey and some songs that are about the writing process in a way. We didn’t need a library shelf dedicated to this; any research was done on the jog.


Q. Tell me about the recording process. How did you end up working with Matt Allwright (BBC Presenter) who provides pedal steel?

A. It all came together quickly, we know Matt Allwright through my mate Scott who runs Balcony shirts in Uxbridge (check our Tunnel Vision podcast show) Matt was quick to realise his parts and intuitively he played on the ones that work for pedal steel beautifully.

Luca is studio head musician as well as producer, all those lovely electric guitars, drums, bass, organ piano and bv’s is all Luca. He is a king of arrangements too! I’m ever so lucky. But I had to fashion my chords, melody or lyrics to the occasion. And my friend Dan Towler, also a songwriter, did some amazing additional vocals and you can’t tell which of us is which. I like that.

Most of all I like writing songs with Luca. He can always help a line or a chord along with fluidity. You need all these elements, I think.


Q. The album is very short - 9 songs and around 20 mins in total. Is there a reason why you go against the 'standard' durations which most songwriters today follow?

A. I think partly in order to go against the standard of 5 minute songs, if I’m honest. It isn’t as if you can’t listen again? There are lots of good long songs when the writer feels or the song shows they should be. Here we kept the songs lean, with a good chorus. I know they are popular but anthems are not my bag.


Q. For you, what constitutes as a 'great song'?

A. When a word is combined in perfect wedding to melody and vice versa. It is hard to write convincingly I reckon. 'My Heart Stood Still' by Rodgers & Hart is a song I love, and I love them. That is a gold standard writing team. I look to them and use them as a bar way too high for me.

Q. Did you start writing songs at a young age? What started your love of music?

A. I sang to my mum at night as a baby, so I am told. I was in school choir and later in a Youth theatre where I met half of my first band that Luca was drummer in. I played Joey Biltmore in Guys and Dolls, Burt in Blitz, Mr Fox in Pinocchio. I love acting. Started writing at 14. It was all about guitars and gigs and sweating a lot back then.


Q. Is there a song you have written, or an album you are most proud of?

A. 'Signal Man', 'Haven't Seen Her in a While', 'Just a Fool', '80's Beach Emotion'. The album I am proudest of is 'Year After Year' (contractually obligated). I really like some of my comedy songs but my songs with Luca are the best really.


Q. What started with your fascination with The American Songbook, Broadway Musicals e.t.c.?

A. I was feeling low one day, I didn’t know what to do so I watched South Pacific which I’d seen along with many musicals before but this time it hit me properly. All the color and passion and brilliance of it. I then ordered in books and searched for hours to find more and more information. Luca and I both looked at chords and listened and talked a fair bit. The American songbook has had a massive effect on our great songwriters; Davies, Coward, McCartney and more.

They are sadly overlooked now, people like Dorothy Fields. But anyone who reads this can start up with the brilliant Afterglow radio from beautiful Bloomington Indiana. Mark Chilla has an archive and you’ll find the standards are a treat.


Q. Your first album Almanac (2008) is very different to your later ones with Luca Nieri. Do you find it better to work in a team? Does it affect the songwriting/creativity?

A. It is much better for me to be in a team. If the producer is also a proper musician and then an actual writer who really sees a way forward then you are so close to a tighter vision? The discussion is very important. So are surroundings. We write in a spot off the grid, and I do collage art, whilst Luca is a brilliant artist and can turn to graffiti or stark pencil works and paintings that are brilliant. Art is a really important part of our vision; it is as much therapy as music. Luca edits our videos taking all artistic responsibility into the fold. It is a way and it does help gel stuff to be honest. On a personal note, I would like access to a bunch of Jazz musicians in Prague. We could record and then have food just off of Charles bridge?


Q. You recorded a number of superb demos with your old band Starky (90s/early 00s). How do you look back on your experiences with the band? Will the songs ever be released?

A. We were good. Had lots of fun. Luca was 1st drummer then went off to do all manner of brilliant music and art. Our next drummer was Jody Moroney (great drummer name) who now plays with a few acts including a project with Little Barry.
We never released a thing. The band we were gigging and writing madly and recorded most of our stuff on Tascam 4 trks later 8 trks. I had a side blues and folk novelty gig of sitting on pub stools and belching at people. I was pretty good, I was honest and no-one was then really. The open mic nights were a scam. I went for travelling gigs and the odd residency.
Q. What are your favourite experiences/places you have visited e.t.c. whilst making music?

A. Greek Islands. It is the purest light in the centre of the world and you can breathe and be yourself and melt into the landscape.
Q. Do you have any plans for new projects, gigs e.t.c. in the future?
A. We are writing all the time for different bits n bobs. But we will try to do a Christmas song every year from now if we can, since we have done 4 these few years and we really enjoy it.

Check out Luca’s Etrurian Shades album. I love the Luca Nieri albums and people should hear all of them. Certainly, Spring to Summer 2022 is a goal for the next project from Luca and I.